Change, happens, whether you acknowledge it or not.
It happens and it is upon us right now. Fighting the change while in it, doesn't make the change not happen. It just makes you the frog swimming around in the simmer pot complaining about how hot it's getting. And well, old white men, soup's on. 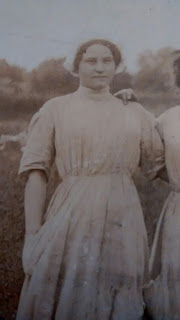 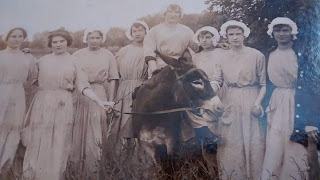 These ladies are from my ancestral past. Not that far back either, my grandmother, great aunts. 8 Sisters. The Carr sisters. 1914 this was was taken. My dad's mom is the far left (and enlarged photo) she had a "surprise" pregnancy out of wedlock (Catholic) and had the child taken from her immediately as she had Tuberculosis and died shortly after childbirth at 30.
My dad also had TB and was taken immediately to a Catholic quarantine/orphanage in 1926 where he spent many years. The records are murky, but he was finally adopted by the sister on the donkey...Theresa, who we knew as our Grandma (siblings knew her, I met her once before she died in 1978) Theresa was married to Len, and he was a dynamic character and opened one of the first liquor bars the minute prohibition was over. They had no kids of their own.
Most of these women didn't make it out of their 20s. A couple made it to 95 and thanks to Ancestry . com I was able to locate some offspring and send them photo albums I had uncovered of their moms and grandmas from 1900. One named Claude lives in Arizona. They did say 'thanks' but I wasn't like on the holiday dinner list or anything. And for my family that's pretty standard. The ignoring part... and who knows they may not even have a holiday dinner part. And knowing me, I'd rather cater someone else's holiday dinner than be seated at another. But I'd say Thanks for sure.
I closed an entire estate of my deceased parents and I didn't get the 'thanks' part from the siblings I know, so I expect not the ticker tape parade from a 120 year old photo album. My mom used to call the family "more reserved" than I would probably like. Meh. Rude is another word. Secretive, yet another.
Anyway, I digress.

I don't want to roast that old "family let down" chestnut again. I think I've let that go. Right? Maybe not, but I'm working on it. It was ONLY three years ago. Seems 3 lifetimes. But really...THREE years. I was treated like a silly female and incompetent by the elder male siblings. As a business owner, independent never married woman in control of my own destiny for over 50 years, I took offense to that. But thanks to therapy, a shaman in Oaxaca and some gentle herbal cures, I'll let it go.
Okay so back to Change. 120 years ago these women were shamed for a lot of things. They did not have a lot of choices. They could plow the fields on this donkey. They could be thrown out of the Church for an "Accidental" pregnancy/(rape). NO ONE talked about this in my family. And if you know me at all, you know I'm The Investigator. I have never in the history of Me shrugged my shoulders and walked away. Effective for journalism and unpopularity at the same time. I'm less Gladys Kravitz these days (Bewitched TV show nosy neighbor, Google it) 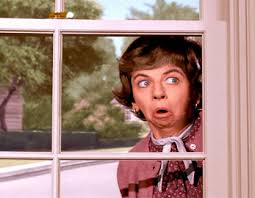 I only investigate things that affect me. Olive oil fraud, chicken business slave trade, water contamination, DNA trauma of ancestors-- current rotation.But looking at the timelines and the census reports and photos and birth records and her health records how could that have been anything but abuse/rape? The blame was on her because she was "pregnant out of wedlock" was the story I got for decades. And well, fuck that. She had advanced TB. What "mystery man" 9 mos prior to her death was enraptured by a sickly 29 year old with a lung infection. Also 29 is a little long in the tooth back in 1900. Nearly a grandma. Two other sisters had gone into the convent, if I had to guess I'd say Veronica was also in the convent or the Catholic hospital, noticing a trend? Am I making you uncomfortable?
Women couldn't say anything then. No one believed them then. It was (still) their fault then. What were you wearing? A bonnet and an old gunney sack dress down to your ankles? Asking for it. A nun's habit? Role playing temptress. Women were chattel. Without a Voice. That sounds insane especially if you're reading this and you are a female born after 1970. Or if you were just adjusting the filters on your Instagram booty pics or you just told your husband (or wife!) to take out the trash because you are on your way to a Board meeting. We have lots of choices these days. We're so far along that we don't even take them for granted...BUT we walk dangerously close to the edge of the swamp ignoring the fact that there are still alligators swimming in there. One slippery shoreline slope trip up and we're all back plowing the fields and earning 40cents on the dollar and still birthin' dem babies and not pointing the finger at our abusers.

So just a gentle reminder to get out and vote. Community level stuff. Stuff you buy too, who's behind the toxic algae bloom in Florida? Are you sucking on a sugary snack right now? Part of the problem. It's not all politics but it's for sure all rich monopolies. Investigate these goofballs running for office don't just pick the one with the colorful signs in your neighbor's front yard. This isn't a horse race, it matters. Pick the candidate without fraud, criminally antiquated ideals about women's health rights and narrow minds about people of color on their record...don't vote party line, or how your parents did...use your big fat meaty brain (hat rack). I'm not saying you should vote for women or people of color just because, but look at what they stand for and look at the women on this donkey and remember 100 yrs ago we couldn't even VOTE. And I'm WHITE. The gap was even more narrow for Blacks. 53 years ago...think about that!!! We need a progressive, tolerant, inclusive world going forward. I don't have kids, but a lot of you do. Let's leave it better than we found it.

The Culture of Fear is what keeps things the Same Same, but people are waking up. It may not be you but my guess is that there are more of the Waking and Woke than the Old Guard. Let go or be dragged, because we're storming the Castle. And we're already here.