I live in the kind of town where, not surprisingly, one cannot find any fish roe. And, also not surprisingly, where they look at you and point to the Fish in a Row behind the case and wonder what you're talking about. It's fine, I can't move back to 1954 in the foothills of the Appalachian Mountains and whine about not having a decent deli with Mediterranean Mezze and a vast international food scene. I'm pretty clear on the limitations of the area regarding ingredients, but it never hurts to ask.

As I close the decade of living here after life in Atlanta, New York, Miami, Tampa, Santa Fe, Oaxaca, Tulum, I miss different tastes and cuisines and yes, someone else cooking occasionally, but when you retreat like I did, the terrain comes with compromises. The first trip I've planned in years is on the calendar and is food focused and in Italy. It's time to put my palate back in my head. But at present, I am here. And I have cravings.

The past couple years I was in Clearwater for family stuff and one of the highlights of a rather dismal stay was the ability to get good Greek food. One such spot close to home was Sofia's cafe,  an unassuming little kiosk that used to be a Baskin Robbins near Oak Grove Middle School in my day.

Of all the many thankless things one tends to in dissolving a family estate, cooking well for oneself is not one of them. Even if you used to be a chef. I have always cooked from love, not training. And I simply could not do it justice with a broken heart. So I turned to take out. Good take out, you'll not likely catch me in a drive thru. I was mourning, I hadn't lost my mind.

Taramasalata was introduced to me by a plucky New Yorker named Nicky who let me sleep on her sofa for a while when I moved to NYC in 1995. I had a job and thought getting an apt was the easy bit. I had it backwards. I slept on a lot of sofas that year. Anyway, she lived just on the edge of Spanish Harlem which is now probably Artisan Aubergine Cakelette Promenade. She was a school teacher, a hippie Jewish girl from LA who had a cool basement studio with roof access in a rent control. She also passed Zabar's on her way home from work. What's 20 blocks? Now that I think about that amazing Central Park neighborhood and her proximity to Riverside. Ugh. What a spot!

Nicky introduced me to Tarama and lots of mezze things really. I was pretty clueless when I got to NYC. I didn't know shawarma from falafel. Zabar's had some soupy, pinkish roe and potato spread that you could grab and spread on pita or french bread and drink with fizzy Portuguese Vinho Verde on someone's fire escape and talk about the future you thought you'd have when you got the apartment/man/career of your destiny. I hum a Carly Simon tune while I type this but those WERE the good ol days but we didn't know it. Such a peculiar human condition that we reflect fondly, but toil in the moment agitated for the future. I did anyway. I'm not wistful at 50, but I readily admit that I wasted a ton of my 20s wondering why it wasn't another way and when Would My Life Begin. I don't think this is unique, but I was VERY happy to be done with my 20s. And 30s.

So anyway, Fish Roe is the main ingredient for Taramasalata and today when the fish counter gal (who is 28, exactly my age in my NYC chapter) and I started talking, she asked What Are You Making? She said she wanted to go Paleo but her husband wouldn't let her.

This swiftly turned into me explaining that you don't have to eat the same shit because you're married and he can get fat alone, thank you very much, it's not 1952. Make your own freakin dinner.

She was polite and said, yea, it's hard. And I realized it wasn't the time to be giving marital advice. When is it ever, really.
Shut up and post a recipe already.

See? Easy without the fish eggs. Because all I really want to do is dip and spread and use what's right in front of me. I want it easy and I don't want to wonder why there is no fish roe in Habersham County. Cuz like, who cares. That is what I like about being 50. Sometimes good enough, is just great. 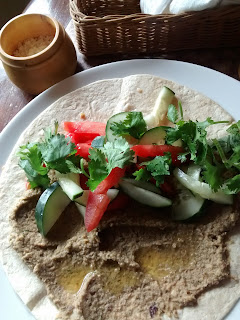